Deb and I attended the 49th annual conference on suicide at the American Association of Suicidology at the end of March. The conference had its largest attendance in Association history and was held in Chicago. This is always a great venue to learn and network with national and international folks working to reduce suicide rates, study and educate on the issue of suicide at all levels; whether clinical, research, survivors of suicide loss and attempt, first responders, etc. There were two key breakout sessions I attended that deeply impacted me beyond the amazing and emotional keynote speeches and other presenters. First was a workshop session I attended that was authored by Abby Anderson, Grace Keyes and Dr. David A Jobes, Ph.D. entitled Understanding and Treating Suicidal Risk in Young Children. This was a very powerful session which highlighted Dr. Jobe’s CAMS model (Collaborative Assessment and Management of Suicidality) in clinical settings. Video of treatment for three cases were presented with their therapists which included children ages 5, 8 and 9 years old. It was crushing to hear children this young talking of wanting to die and it was captivating to see how the CAMS model continued to work these children, week over week, to overcome their ideation. I spoke with Dr. Jobes later in the conference and yes, each child is still closely followed but their suicidality has decreased significantly and will hopefully for life.

The second was an amazing talk by Kevin Hines, who survived his jump off the Golden Gate Bridge. Kevin moderated a panel discussion including his father and two other parents who lost their sons to a jump and their bodies were never recovered. Kevin and his family and others have been on a mission for some 15 years now to advocate for the installment of a safety net under the bridge and it was actually part of the design in 1930s when the bridge was in construction as this issue was know then that it would be a problem. The net was never constructed due to cost. The session was very emotional and Kevin’s message as an international speaker on suicide prevention resonates with every testimonial of survivors that ‘the split second I jumped, I knew I had made the wrong choice’ and hitting the water was nothing he had ever planned for and how horrible it was for him to survive. Mistake in choice. Kevin’s story was developed into a movie, The Bridge, and is very graphic but has saved many lives. Kevin also announced that just prior to the conference his foundation’s efforts received a green light from the Golden Gate Association to break ground on a jumper safety net to start this year! The net is essentially 20-30 feet below the pedestrian and traffic deck that is steel mesh and just being in place deters jumpers and gives them added time to reconsider their situation, which is a proven prevention model. Anyone whom might jump will survive but will sustain painful injuries and get help. The Bridge is a metaphor now for other places of significant loss including in the Pacific Norhwest the Monroe Street Bridge in Spokane. Efforts are underway to tackle a similar restriction.

Take a ways: Early diagnosis and intervention is the key to treatment of depression and suicidal ideation. Means restriction is something we can all do now to prevent the lethal actions that most commonly only need to provide a few minutes to get a person over a bad moment and this DOES SAVE LIVES! 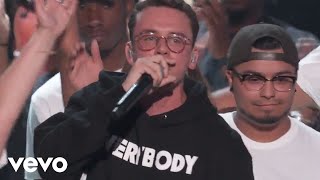 Logic's Powerful Performance at the VMAs